Only Love Is Real: A Story of Soulmates Reunited by Brian Weiss 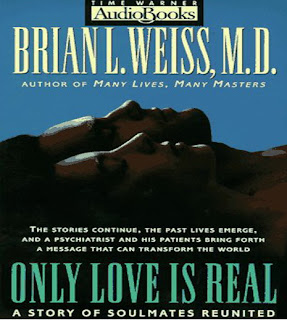 Weiss is the psychiatrist whose best-seller, Many Lives, Many Masters (1988), chronicled the life (and past lives) of one of his patients. Since his breakthrough with Catherine, the hypnotized patient who was able to transmit messages from the beyond as well as recall former lifetimes, Weiss has continued his past-life therapies. Here he threads bits and pieces of what he has learned into the story of Elizabeth and Pedro, two patients who, unbeknownst to Weiss, have lost each other across lifetimes and now have another chance to reconnect. Although the stories of Elizabeth and Pedro form the book's centerpiece, they will probably be the least interesting, at least to the New Age audience, who has heard it all before. Weiss is better when he's explaining the philosophy that incorporates past lives into a therapeutic setting. This isn't the best book on the subject, but Many Lives, Many Masters sold more than a million copies, and Weiss' name, as well as an extensive marketing campaign, is likely to generate demand. Ilene Cooper --This text refers to the Hardcover edition.